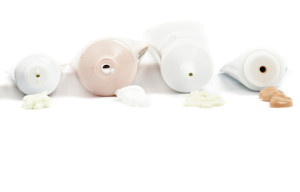 Urban lifestyles such as those seen in Korea are the root of the character of BB Creams: practical, chic and quick and easy to use. BB stands for „Blemish Balm“. In summary, a BB-cream is a tinted day cream which coats the skin with a light tint, and produces an even skin tone. A BB-cream also moisturises the skin and provides a protective film against moisture loss.

This type of cream was invented in Germany by Dr Schrammek for use as a protective skin cover after a skin-peeling. Korean Nurses discovered the BB-cream whilst working in Germany and took the idea back with them to Korea. From here BB-creams were further developed and began to conquer the World. The cosmetic industry picked up the concept of BB-creams and enhanced the basic idea to produce CC and DD creams.

DD creams are designed to „disguise and diminish“. All of the skin care elements of BB creams and CC creams are included plus additional active ingredients against wrinkles, dark spots, reddening and other signs of skin ageing. These creams are rather rich and generally targeted at mature skin.

Have you considered extending your current range with BB creams, CC and DD creams? Then please get in touch to discuss how we can help you.