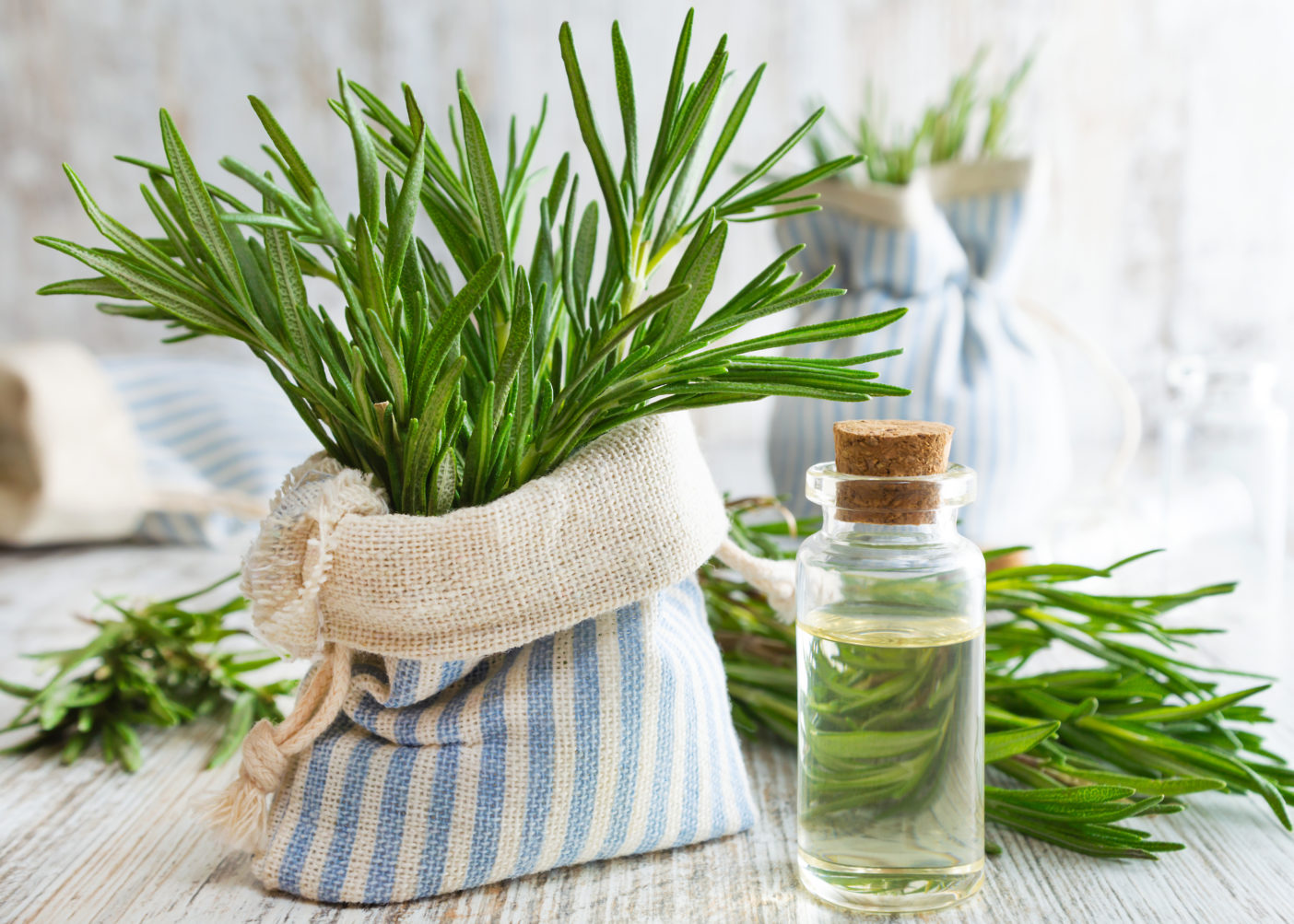 The evergreen rosemary (Rosmarinuns officinalis) is a subshrub of the family of lamiaceae and indigenous mainly in the western Mediterranean region. It can grow up to two meters and exudes an intensive aromatic scent. Its slightly bitter, resinous taste reminds somewhat of eucalyptus or camphor. For a long time, rosemary has been regarded as a symbol of love. The plant was woven into wreaths worn by brides as head decoration. Ophelia, as a sign of her faithfulness, made a rosemary garland for Hamlet. Troubabours striving to win a lady’s love handed over a rosemary bouquet to her.

Until today, rosemary has been an essential component in Mediterranean cooking and an element of Provençal herbs. The popular grill spice harmonizes excellently with meat, potatoes, poultry, pasta, and is a common ingredient in herb butter.

Rosemary also is known as the food additive E 392, often used as a preservative and antioxidant. In frozen pizza, sandwich spread, or sauces and soups: E 392 is almost ubiquitous and regarded as a safe ingredient, provided that there are no allergies against components of rosemary. Moreover, the plant plays an important role in perfumery. The traditional cologne for example has contained rosemary oil now as ever.

In Germany, rosemary was appointed the medicinal plant of the year 2000 and 2011. The extract is administered internally to stimulate gail secretion and urination. Traditionally ointments with rosemary are used for rheumatism and migraine. Poorly healing or infected wounds profit by rosemary baths. The antiseptic effect of rosemary oil is five times higher than that of phenol (carbolic acid). According to the European Pharmacopoeia, the oil derived from the plant per steam distillation features antimicrobial activity and is effective against serveral moulds, bacteria, and yeasts.

The components of rosemary

Ursolic acid, rosmarinic acid, and carnosid acid are regarded as the main active agents in rosemary and of interest for cosmetics. In the following, we describe them in more detail.

Carnosid acid is contained in rosemary and some sorts of sage. It counts among the phenols and diterpenes and belongs to the group of ferruginol derivatives. Dried rosemary and sage leaves have a content of carnosid acid of approx. 1.5 to 2.5 percent.

Carnosid acid is a yellow powder with a bitter taste, obtained from rosemary per solvent extraction by means of ethanol and/or hexane, or high pressure extraction with carbon dioxide.

The European food safety authority (EFSA), already in summer 2008, confirmed the harmlessness of carnosid acid for the use in food.

Carnosid acid is not only an antioxidant but also has antimicrobial effects particulary active against the bacterium staphylococcus aureus. The effect is explained by the inhibition of the biosynthesis of the nucleic acid in the bacterium. Moreover, aninmal tests proved that carnosid acid has a chemoprotective effect against carcinogens.

Solubility: almost not soluble in water, well soluble in hexane, lipids, and diethylether

The triterpenoid ursolic acid, also known as malol, prunol, and urson, is not only found in rosemary but also in apples, basil, catmint, ilex, thyme, and many other plants. It has a so-called picen structure, very common in sapogenines. The structure of ursolic acid is similar to oleanolic acid. Researchers identified the pharmocological properties of ursolic acid already some time ago. The focus is on a potential application of the substance to fight cancer diseases and inflammations because ursolic acid shows cytotoxicity as well a cyclooxygenase-inhibiting effects. In animal tests ursolic acid also helped to decrease muscular atrophy. Moreover, the laboratory animals had lower blood levels of cholesterol, triglycerides and glucose.

In the food industry, ursolic acid is used as an auxiliary material. Athletes appreciate food with natural ursolic acid because it helps the organism to burn fat.

Ursolic acid stimulates the collagen synthesis in the skin. If the body-own collagen strutcure is defective, even highly effective active agents, e.g. hyaluronic acid, cannot attach to their targets and become comparable to sieves used for carrying water. As an ingredient in cosmetic products ursolic acid boosts skin‘s metabolism. It has highly regenerating properties and is particularly suitable for anti-aging skincare. It is very safe and gentle. Principally, even persons with sensitive skin can use cosmetic products with ursolic acid without any problems.

Solubility: almost not soluble in water 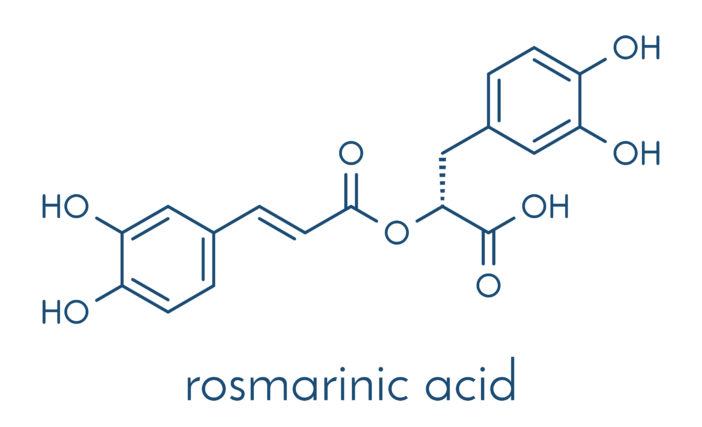 The phenyl acrylic acid rosmarinic acid for the first time was discovered and isolated in 1958.

As its name suggests, the scientists isolated it from rosemary. Rosmarinic acid is really widespread in the plant kingdom. For example, it is a common component in many

hornworts and ferns. In plants, rosmarinic acid is active in the defense against bacteria and fungi. Rosmarinic acid works a tannin, influences the complement-dependent stimulation of the prostaglandin synthesis, and blocks opsonization. Atheletes appreciate ointments with rosmarinic acid because of the antiviral, antibacterial, and anti-inflammatory effects of the substance. Due to the same reasons, rosmarinic acid is ideal for cosmetic use. In addition, rosmarinic acid helps to stimulate circulation and blood flow. Therefore it is able to boost skin’s metabolism and is a great choice for anti-cellulite formulations and products for mature skin.

Rosmarinic acid, ursolic acid, and carnosid acid are the three „secret weapons“ in rosemary. The spice shrub rosemary is more than a component of Mediterranean cuisine. Thanks to its main active agents, rosemarinc acid, ursolic acid, and carnosid acid, it is excellent for cosmetic formulations, particularly in the anti-aging segment. Products prepared with this ingredient will revitalize and refresh the appearance of tired and dull skin. The extract not only is a great option for facial care. Used in bath products it reveals its calming effects, and in shampoos it soothes itching scalp and reduces dandruff. Ursolic acid or rosmarinic acid is also suitable for peelings, soaps, and shower gels. Cosmacon is looking forward to supporting you in the development of innovative cosmetic products with carnosid acid.

Please contact us with your questions. We are eager to provide you with our professional advice!